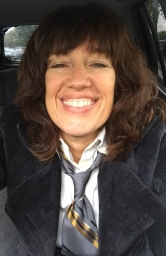 I’m Stephanie Bryson. I’m an 80’s queer activist and cultural studies theorist turned social work professor.  I’m also a breadwinner, the wife of a wife, and the mother of two quirky girls–one of whom identifies strongly with Tina Belcher on Bob’s Burgers.

Occasionally I screenprint cat t-shirts, compose repetitive music on a Casio keyboard I bought my kids but rarely let them use, write about popular culture and social movements, and scrawl lazy, half-finished poems on scraps of paper. All of that and more lives here.

The name of the blog actually showed up in my head one day, then when I foraged in the internets, I found this great paper by  Kristin Stock at Massey University on ontology languages used in computer science. Here is my favorite quote and the point of this blog, which is to embrace the rhizomatic character of social justice in the 21st century:

… The homogenisation of ways of looking at the world may result in the loss of thoughts and ideas that come from unusual and innovative thinking, and that sometimes arise from the friction between different ways of thinking. This concern about ontologies is similar to the concern about domination of the English language at the expense of other languages and the resulting loss of intellectual diversity…

COVER ART CREDIT: “Tiger Man” is by KyzKrus of Deviant Art. It more than fulfilled the fantasies I had of a tiger man while listening to Goldfrapp’s song of the same name.